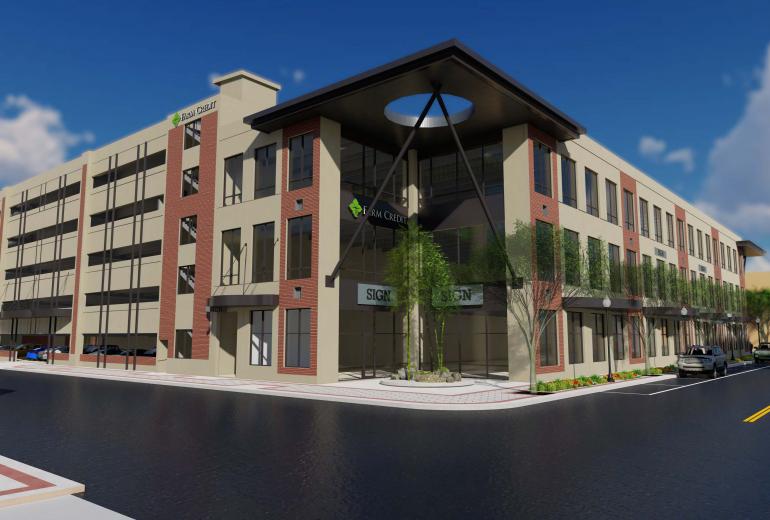 At this year’s annual stockholder’s meeting, Farm Credit of Central Florida announced the development of a new headquarter office with plans to relocate in late-2020.

Farm Credit will occupy half of the 40,000 square foot office space located on East Orange Street and Tennessee Avenue. This project is part of the recently announced downtown parking project. The building is attached to a garage that will create an additional 700 spaces for professionals and city workers in the downtown Lakeland area.

"We are so excited for this new office space," Reggie Holt, President and CEO of Farm Credit said. "We know this will elevate our current employee experience and relationship with the community. We look forward to the positive change it will bring the organization and how we work."

The project started with the garage development as a partnership between Aspyre Properties, City of Lakeland, Lakeland Regional Heath Systems and MidFlorida Credit Union and has been in the works for over three years. Downtown Lakeland has not seen a project of this kind in more than 40 years.

"The story behind our connection to Aspyre Properties, the developer of this project, is unique. It is steeped in a legacy and dates back to the late-1960's," Holt said. "Wesley Beck’s father was the President of Farm Credit of Central Florida from 1967 to 1989. He knows Farm Credit and understands our mission. We could not think of a better partner for this venture."

"My dad spent his entire career with Farm Credit, over 30 years," Wesley Beck, President of Aspyre Properties said. "I grew up my whole life around Farm Credit. I know the system, I am actually a shareholder. All of the makings for a good relationship are there."

David Buckner of Buckner Commercial Properties, a leader in commercial and industrial office space, and the Lakeland Economic Development Council helped connect Farm Credit of Central Florida and Aspyre Properties for this project.

"My long term relationship with Farm Credit is very important, we have been working together for over 15 years," Buckner said. "It has been a fantastic relationship over the years and we are pleased to be a part of this."

This project is part of many downtown improvements as part of the Lakeland Economic Development Council’s vision for downtown Lakeland. Farm Credit is excited to be a part of this project and relocate to the core downtown area! Stay tuned for more details and announcements as the construction progresses.