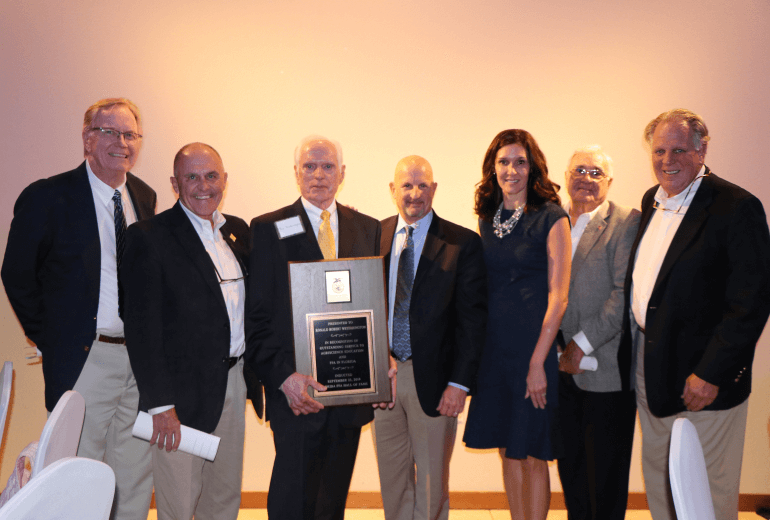 A fourth-generation Dover farmer, Farm Credit of Central Florida Director Ronald Wetherington is an alumnus of Turkey Creek High School and a proud alumnus and supporter of Florida FFA.

As an active member, he completed livestock projects, raised crops, and volunteered in his community. In 1958, he earned the American FFA Degree, the highest degree achievable in the National FFA organization. He continued his support of Florida FFA and its members as the years passed, even serving the Florida FFA Foundation.

While serving the foundation, he was fundamental in procuring funds needed for the construction of the FFA Leadership Training Center in Haines City. Once funds were secured, he put his efforts into ensuring the training center was just right. He dug the water line that connects the sporting clay facility and the main water system. He additionally played a large part in the annual Beast Feast and the sporting clays project that both raise funds for the foundation. At the very training center he fought for, he was inducted into the Florida FFA Hall of Fame.

Director Wetherington cited the FFA Code of Ethics as what he lives by. With ideals such as “Develop my potential for premier leadership, personal growth and career success,” it is clear that he has done just that. Now with four generations involved in FFA and a great-granddaughter already riding horses, he is excited to see the future direction that FFA leads his family. His granddaughter, Scarlet Jackson, is currently following his example by serving the Foundation as a secretary/treasurer on the Board of Trustees for the foundation as well as serving as the executive director for Florida FFA. Director Wetherington has left a legacy for Florida FFA and a path for others to continue.

In addition to his service to Florida FFA and Farm Credit of Central Florida, he serves his church as a deacon. In the agriculture community, Director Wetherington has received many awards and honors, including the 2015 Hillsborough County Citizens Award, Plant City Agriculturalist of the Year, Honorary American FFA Degree, Florida Farm Bureau Distinguished Service Award, and the 2019 Lifetime Achievement Award at the Hillsborough Harvest Awards; and he was inducted into the Florida Strawberry Hall of Fame in 2005.

Director Wetherington has diligently served Farm Credit of Central Florida’s board since May of 1993.
His current term expires in 2020. We congratulate him on this marvelous achievement.