Choosing the Best Crop When Investing in Florida Farmland 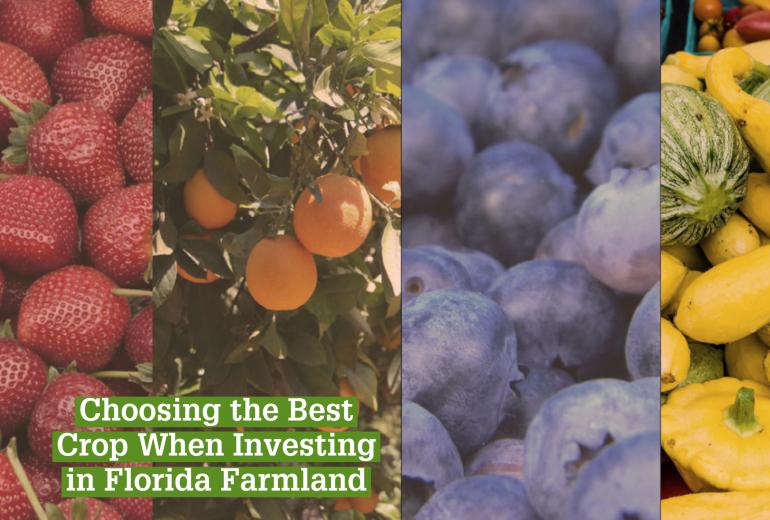 When deciding to invest in Florida farmland, there are lots of options available when it comes to crops. Thankfully, with the consistently warm temperatures, cold weather is not much of a threat to most crops, depending on the geographic location in the state crops are grown.

Ultimately, when deciding to invest in a crop, you’ll need to decide how your farm will be managed (link to management post). Many crops require more care than others. Aside from that, here is a breakdown of various crop groups along with their total cash receipts according to statistics reported by the Florida Department of Agriculture and Consumer Services in 2017.

Horticultural crops in the state of Florida include a greenhouse, nursery, and other miscellaneous products. These crops are spread throughout the state, and floriculture (flowers and foliage) are a large segment of Florida’s horticulture crops. Cash receipts in 2017 are an estimated $3 billion.

This is a very large segment of various consumable crops that many don’t realize are grown in Florida. Here are the top ten most valuable crops from highest to lowest.

Although citrus production is not what it once was in the state of Florida, it still accounts for 46 percent of the total production for the United States. Within this category are various oranges (Navel, Hamlin, Tangerine, Mandarin, Pineapple, and Valencia) and of course, grapefruit. The overall value equating to sales on-tree is $7.87 million.

Many do not consider timber a crop, but it can be quite lucrative with little ongoing maintenance like other crops. According to IFAS, Florida timber contributes around $16 billion dollars to the state economy each year. Seventy-one percent of that production comes from private land. The other is a combination of state and federal land. The largest production use is for pulp and paper. Other activities include logging, secondary forest products, and lumber manufacturing.

Field crops are usually grown over large expanses of land and include items such as corn, cotton, cottonseed, hay, peanuts, soybeans, and wheat. These crops alone accounted for $354 million in 2017. Most field crops are located in more unincorporated areas of the state due to the wide expanse of land needed.

Raising livestock was one of the first commercial crops in the state. Early settlers found a plethora of wild cattle that originated from Spain and began driving them across rough conditions and terrain to sell them at auctions and ports for export. Modern cowboys and cowgirls still exist in Florida, and they raise to sell 1.63 million head of cattle. The three top-ranking counties for cattle were Okeechobee, Highlands and Osceola.

As a total, there were 417,000 farms in Florida in 2017 equating to a total of 9.4 million acres and an average farm size of 201 acres. Thankfully, acreage size has nothing to do with the profitability of a farm. Proper management is everything! (link to first blog post)

If any of these crops interest you, feel free to give us a call. Farm Credit representatives would be glad to answer questions you might have regarding recent production, tracts of land, etc.