Though modern ag-tech has developed some mechanized processes for reaping fresh berries, widespread commercial adoption of such remains far off. Thus, of the nearly 27 billion pounds of American strawberries harvested in 2021, all but a few pints were picked by hand. That, folks, requires some intensive labor! But besides the sheer scale of workers needed to harvest strawberries, two more aspects of the industry prove extremely challenging: the availability of local labor and the seasonality of picking. Most farm production occurs in rural areas without an employment pool large or skilled enough to get the job done before the crop begins rotting. Further, with narrow seasonal harvest windows, even if there were enough workers nearby there might not be another local job opportunity when picking ends. These difficulties are endemic for the overarching agricultural community, not singularly strawberries, and thus as a temporary band-aid for such (oversimplified) complications, Congress stepped in and created the H-2A program.

Migratory manual agricultural labor in the US has its roots in the Bracero program of the 1940s, when, in the midst of WWII workers from Mexico were brought across the border with promises of guaranteed wages and housing. While the Bracero program ended in 1964, the original H-2 migrant labor program was the result of the 1952 McCarren-Walter (Immigration and Nationality) Act under the Truman administration. According to the act, agricultural jobs were part of the same visa approval pot with various types of labor unable to be found Stateside. The framework for the current H-2A program, however, was set in place under a piece of “pro-business” legislation during the Reagan administration: the Simpson-Mazzoli (Immigration Reform and Control) Act of 1986 which finally bifurcated agricultural employees from others.

Today, the H-2A program is an indispensable aspect of labor policy for the American agricultural community and the state of Florida is the most reliant on such labor. In the fiscal year 2022 farmers and businesses had 371,619 requests for H-2A visas certified by the DoL, an approval rate of almost 98%. Of those, 50,973 (13.7%) were slated for jobs in Florida, with California second (43,760), followed by Georgia (34,974) and then Washington (33,049). Over 84% of the workers coming to the US are listed as farmworkers, with just under 7% considered equipment operators and 4.3% as ranch hands or aquacultural employees. Nationally, only 1.6% of H-2A visa holders are specified as nursery workers. How does this impact Florida’s strawberry industry? Well, the overwhelming majority of fields hosting those ripening nuggets are in Hillsborough county (though there has been migration to neighboring regions), thus while we don’t know exactly how many laborers the strawberry industry utilizes we have a decent indicator. In 2022 there were 7,112 H-2A visa holders certified for worksites in Hillsborough county, mostly requested for time periods from the fall through late spring – peak strawberry planting and harvesting season.

While Hillsborough county is responsible for about 66% of the H-2A visas in Farm Credit of Central Florida’s territory, nearly 80% of permits are allotted to companies elsewhere in the state, primarily the fruit, vegetable, and nursery production regions of south Florida. The top county for worksite permits in 2022 was Manatee at 7,421, followed by Hillsborough, and then DeSoto (3,974), Hendry (3,781), and Highlands (3,554) rounding out the top five. Overall, about 92% of H-2A visas go to workers from Mexico, 3% to South Africans, and the remaining few mainly to laborers from Guatemala, Peru, Honduras, Nicaragua, and Romania.

Accounting for more than 50,000 employees across the Sunshine State, the H-2A program plays an indispensable role in Florida agriculture. While modernization and technological innovation slowly are picking up the crop harvesting burden, American farmers continue to expand their reliance on the program, with total permits increasing by more than 81% compared with pre-pandemic levels. For all the support and criticism the permitting process receives, it should be noted that it has always been intended as a temporary prescription, not as a cure to the nation’s labor woes. 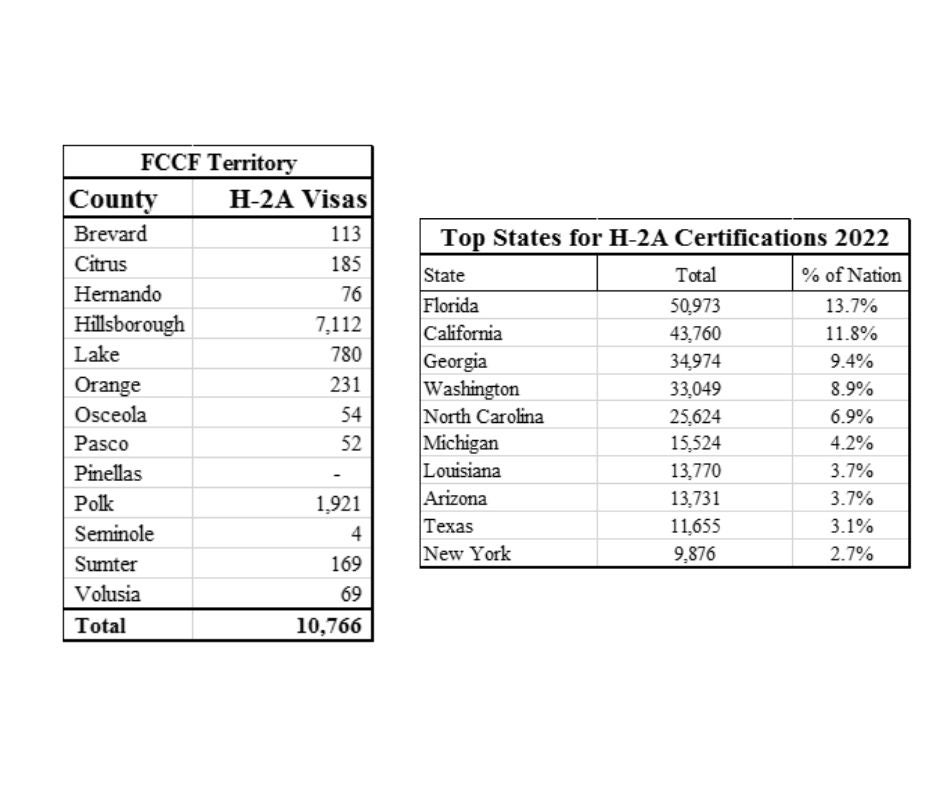